This morning a panel of intelligence experts released “Recommendations and Report of The Task Force on US Drone Policy” which reviews the risk and benefits of current US drone policy.

The panel made the following eight recomendations:

The OUPBlog recently posted a piece by Sascha-Dominik Bachmann entitled Drone Killings. Adapted from an article published in the Journal of Conflict and Security Law, this post argues that  the use of drone technology “has direct implications for the morality of armed conflict and combat” because it puts too much distance between the shooter and the target. He then goes on to argue that the U.S. Government should reevaluate its use of Drone Technology and concern itself more with the broad issue of collateral damage.

The following video and article were originally created and posted by CFR.org.  You can visit their site HERE.

As for the three points discussed by Matthew C. Waxman (in the following video), I think the first point is the most important. After all, whether or not the U.S. is at war determines if the LOAC paradigm is applicable to the situation.

END_OF_DOCUMENT_TOKEN_TO_BE_REPLACED

The debate concerning the geographic limits of the battlefield is not a new one.  In fact, the debate has been ongoing at least since the U.S. declared that it was engaged in a “War on Terror.”  After all, terrorist groups such as al-Qaeda are organizations and they typically have no geographic nation or state.  So, contrary to the traditional war paradigm we are used to, when the U.S. sent troops into Afghanistan to combat the al-Qaeda organization, the U.S. was not going to war with Afghanistan.

However, the author of the above referenced HuffingtonPost.com article suggests that a 2002 Drone attack in Yemen is what “blew apart notions of ‘war’ and ‘battlefield’ which has guided the application of the legal traditions, treaties and laws of armed conflict for centuries.”

END_OF_DOCUMENT_TOKEN_TO_BE_REPLACED

This image released by the Department of Defense shows the . . . newly announced Distinguished Warefare Medal. The Pentagon is creating the new medal that can be awarded to troops who have a direct impact on combat operations but do it from afar. The medal will be awarded to individuals for “extraordinary achievement” related to a military operation. (AP Photo/Department of Defense) – Link to source

END_OF_DOCUMENT_TOKEN_TO_BE_REPLACED

Here is a link to the memo that was obtained by NBC.com, as well as the accompanying story that NBC posted.

In his article published in Harvard Law School’s National Security Journal, Charles Kels argues that the debate surrounding the application of the LOAC to the war against al-Qaeda and targeted killings often crosses the paradigm boundary between jus ad bellum (the law governing the use of force) and jus in bello (the laws in war) to the detriment of LOAC’s fundamental aim, the protection of humanity.

He concludes, “LOAC is apolitical. Adherence to it does not legitimize an unlawful resort to force, just as its violation—unless systematic—does not automatically render one’s cause unjust. The answer for those who object to U.S. targeted killing and indefinite detention is not to apply a peace paradigm that would invalidate LOAC and undercut the belligerent immunity of soldiers, but to direct their arguments to the political leadership regarding the decision to use force in the first place. Attacking LOAC for its perceived leniency and demanding the “pristine purity” of HRL in military operations is actually quite dangerous and counterproductive from a humanitarian perspective, because there remains the distinct possibility that the alternative to LOAC is not HRL but “lawlessness.” While there are certainly examples of armies that have acquitted themselves quite well in law enforcement roles—and while most nations do not subscribe to the strict U.S. delineation between military and police forces—the vast bulk of history indicates that in the context of armed hostilities, LOAC is by far the best case scenario, not the worst.”

In my opinion the article is worth reading. For starters, it provides a good reminder of the fundamental debate surrounding the application of the LOAC to America’s use of force against terrorist organizations. The author spends sometime at the beginning of the article detailing the history of the Geneva Conventions and the types of armed conflicts. He then outlines the current debate and the places where they trip the line between the two paradigms of International Law. Most importantly, however, this article adds an outlook not often noted in the LOAC debates – the importance of LOAC to the military.

I found this article on NYTimes.com about how the Obama administration is looking to codify the U.S. drone policy. The article is quite fascinating and addresses a few of the larger complaints and challenges concerning drone usage.

While reading the article, I had several thoughts which I wanted to address here.

My first thought came after reading the following quote:

“One of the things we’ve got to do is put a legal architecture in place, and we need Congressional help in order to do that, to make sure that not only am I reined in but any president’s reined in terms of some of the decisions that we’re making,” Mr. Obama told Jon Stewart in an appearance on “The Daily Show” on Oct. 18.

In the quote above, President Obama states that he needs “Congressional help” in order to put a legal architecture in place for the drone policy. My first thought was that as Commander in Chief, the President has historically been very careful to keep congress out of the decisions of who was designated an enemy combatant.  It will be interesting to see how much congressional help he will accept and what this will do to any current precedent.

END_OF_DOCUMENT_TOKEN_TO_BE_REPLACED

“What was once considered an immediate response to an exceptional threat to the United States is now a permanent and institutionalized feature of U.S. foreign policy. Perhaps by November 3, 2022, policymakers and the American people will have noticed.” ~ Micah Zenko (30 October 2012)

In his report to Foreign Policy, Micah Zenko reminds us that November 3rd marks the 10th Anniversary of U.S. use of Drones for Targeted Killings in the War on Terror – what he terms “America’s Third War.” He shows that this program has largely expanded over the last decade and argues that, unlike the wars in Iraq and Afghanistan, there is no sign that it will be discontinued in the near future.

You can read the entire article here 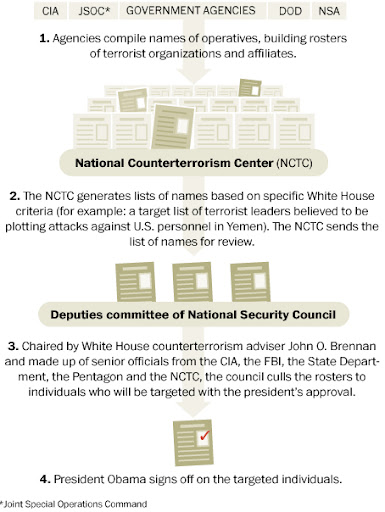